Well when I heard that Martin Salisbury was coming to give a talk about children’s book illustration I thought yes I am definitely going to see that as I had just reviewed a book that he wrote based on this subject. For once there is a children’s illustrator at University that is a well known name! I would love to see Quentin Blake but I assume he is always in high demand and would be very hard to get. Anyway, I went to the talk and it actually flew by which I never find with any presentation. So what did he talk about… again I will write in main points as I know how long blocks of text can put you off from reading it!

He is  the leader of the BA and MA Illustration at the University of Anglian Ruskin and he studied at Cambridge University where Gerald Rose taught him. He defines picture books as a book that delivers a message through pictures and words – they can’t work without each other and that is the difference from an illustrated book and a picture book. When he came out of college he constantly worked on non-fiction as that is the work he could get. Whilst working through his life Quentin Blake gave him good advice which was ‘draw horses in long grass’ so he wouldn’t have to do their legs which can make them look weird if you do it wrong.

Salisbury loves to work in watercolour best as he finds it beautifully technical, this is an image created by watercolours but this was for when he had to make work for non-fiction work.

When he was starting out as an illustrator it was classed as uncool and wasn’t very popular compared to today it’s a popular choice. He is currently working on a book that is looking at 100 children’s books over a 100 years. Salisbury kept saying throughout that there is a big gap between academic study and knowing through making which I totally agree because I love making things but the academic side I find tedious and extremely boring! They need to unite them both so they fit together and help each other rather than this is that and that is the other. He suggested the book The shape of Content which was written in 1956 by Ben Shahn – it basically sums up the tension between scholarly learning and knowing through making. I may look into this book for my dissertation if I focus on a subject that relates to this.

A few quotes that he said I quite liked:

‘Drawing  is a way of reasoning on paper.’ – Saul Steinburg

‘Drawing is another way of thinking’ – Edward Bawden

It annoys me how illustrators tend to have to defend what they do is a job and there a lot more to it than just drawing pretty pictures. A book that he suggested to look at is a book called Understanding Comics by Scott McCloud – this talks about the spaces between the pictures and how they work. I will look at this book in another post.

He talked about what some of the students he has taught and what they did for their final projects and the topic was something I would like to consider – animal characterisation in children’s books and part of it was she made a book called Zoom Zoom Zoom. Another student logged the process of making a book which again I thought would be really good as I could produce a lot of work and learn about it as I make it.

He kept mentioning his students as I think he is proud of them; one of the books he mentioned was Rabbityness by Jo Empson

This colourful book is based around the theme death. Sadly when she was studying at university her brother died and she focused these emotions to produce a book. I admire what she has done as this would be very hard to deal with, by showing themes like this through children’s books, children can learn how to deal with this topic if it happens to them and generally educates them about life.

Books that he picked out which uses clever tricks to engage the reader:

Quentin Blake – Cockatoos. This book uses a pantomime kind of technique to engage the reader as shown below: 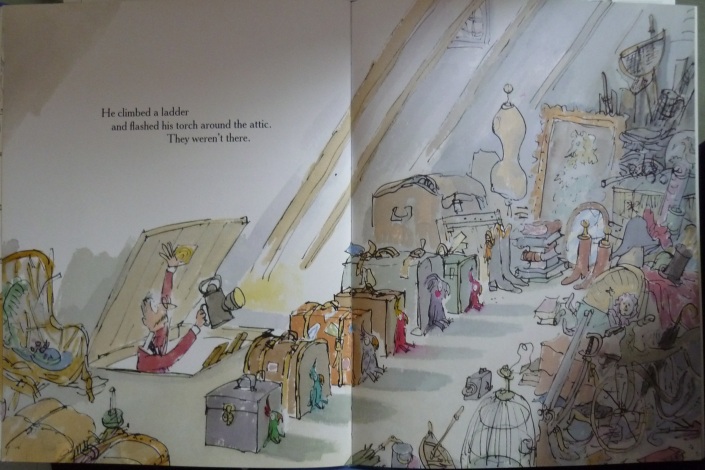 In this image the text claims that there are no birds in the attic because the man can’t see them yet we as the viewer knows they are there because we can see them and we have more information than the main character. When a child or adult reads this the want to shout out that they are there pointing at the book thinking if they point the character will see them. 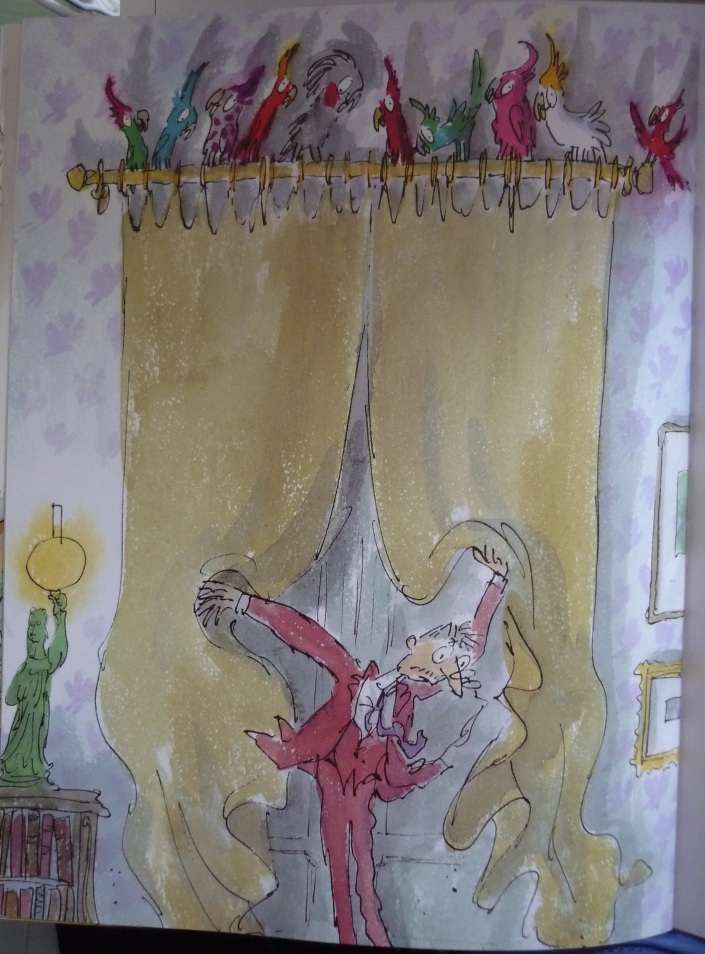 By having the text saying one thing and the image telling another it creates a contradiction but it works. I had never thought of doing that kind of technique and I will definitely consider it when creating my next sequential work.

Some competitions that he mentioned were the Kate Greenaway Prize, Waterstones Book Competition and Bologna prize which is a big international competition. The Bologna Competition  seems real good, they have a large festival where books across the world come together and it’s a big thing. I had never heard of it until now!

This is the link for their website which I will definitely check out!

Finally, some of his influence that he has gained over his time:

Something I found interesting was about Ronald Searle; he has had an interesting life as he was in a concentration camp during the war where he spent nearly all his time drawing. He would ask the guards which he thought were the nicest and ask them if they could get any form of material that he could draw on. At one point they thought he had died due to the high amount of disease within the camps, lying there on the ground motionless until they saw his arm move and he was drawing! He survived the concentration camp and is extremely successful in life.

Salisbury showed us Searle’s marks from his education in drawing and they were I would say below average/ average yet here he is having a plentiful life and being highly successful. It just made me think that marks isn’t the thing that defines your life, it’s what you do after that makes your life stories. I am still obviously going to try hard but I’m going to try and relaxed a bit more and not always be so tense to get everything right first time.

This entry was posted in Martin Salisbury.