So this week I was going to attempt to print something on some material. As I want to go into children’s illustration I wanted to see what my work would look like if it became either a pillow or some form of stationary like they do in book shops. So I created this picture:

To show frustration with inanimate objects I chose the boats to start off with as I thought that would be a good starting point from the last session. I sketched a few ideas out but I didn’t want to just plonk them on which would look boring and lose the interest of the viewer. So I tried to make a mini story out of the image by using different perspective and scales. I placed the little man in the rowing boat really wall as he has got to cross the large sea that is covered with travelling boats.

I really like this image, I think it could have potential to turn into something but I don’t know what yet. The colours of these types of boats tend to be very similar so I tried to make it interesting by using different shaped and sized boats. I made the water so it looked a little choppy to highlight the fact that this isn’t going to be an easy journey. The scale of the whole image is different, I always tend to work in A4 or A3 dimensions but for this scene I felt like that the scene should be wide horizontally due to the long ships and vast ocean. I think this shape definitely works for this scene and I am glad that I wasn’t too scared to restrict myself to standard sizes. However, if I do get this printed it might be a little expensive due to the odd shape and the waste of paper they charge you for. I’ll deal with that when I get there.

So back to printing, well I bought some paper that you print on from your normal printer and then iron onto whatever fabric. I also bought a normal pillow case which was too big for the image so I cut it down and re-sewn the pillow to fit the image. I printed out the image making sure that it was back to front and the colours were roughly correct compared the screen and this was the outcome:

I stuffed this pillow with socks thats why it is a little lumpy, it’s because I didn’t have any pillow stuffing that would fit this kind of shape of pillow.

This is just the case with the print on. I think it would maybe look a little better if the image was larger but I didn’t want it too large that when it was filled with stuffing you couldn’t see what it was. 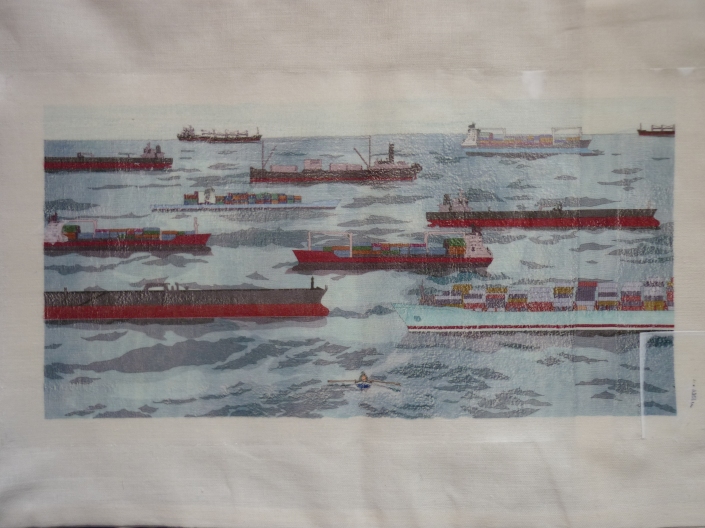 A close up of the image, I was a little disappointed with the outcome as I thought the image would be stronger but I think that is due down to the ironing and transfer. Next time I think I will press down harder with the iron so it transfers better. The corner with the white was a mistake, this section didn’t stick to the material and so I tried to re-iron but it stuck to the piece of paper and ripped. So I took a new transfer sheet and re-ironed over to create a more square corner but I couldn’t iron to the edges and so it left a white part. I think it looks better than it did with the ripped area so I’m ok with the look of that.

Overall, I think it doesn’t look too bad as you still can see what it is and the story it conjures up. I chose to iron it on a off white material because I thought white was too bright and clean. I thought about the boats and the seaside with the old maritime/ vintage feel it can bring and so I picked this material and colour. I would definitely try it again as I found it fun to do but I would try and master the technique of transferring the image better.

This entry was posted in Printing on material.